​The Old Silk Road - A Reminder
​
In your history lessons, you previously learned about the Silk Roads and why they were so important.

Here is the summary from Active History:

The Silk Roads are the most famous long-distance trade route in the ancient world. They began in 130BC when the Han Empire (China) began selling silk to the Parthian Empire (Iran) in return for horses. The Parthians in turn began trading this silk with the Roman Empire (Italy) for wine. Soon, a sophisticated network of routes spread goods, ideas and religions around the civilized world, changing it forever.

Goods such as the magnetic compass, silk, gunpowder and ceramics were traded from Chinese cities to the west. In return the West provided products like wine, glass, olive oil and silver. All along the trade routes, gold was a common form of money for trading. A negative impact was the spread of diseases such as the bubonic plague that spread across Central Asia into China and resulted in the Black Death in Europe.
​
The Silk Roads ended in AD 1453, when the Ottoman Empire of Turkey conquered Constantinople, drove out its Roman occupiers, and stopped trading with the West. The closure of the Silk Roads forced European explorers to find new sea routes to replace over-land trade. This new "Age of Discovery" saw Columbus head West to America (1492) and Vasco de Gama head East to the Spice Islands (1497) - starting a whole new story of European Empire-building... (Active History)

As you can see, trade has created many opportunities but has also led to big problems too.

Jog your memory - Watch the TEDEd video below to remind yourselves of the Silk Roads and how they connected the world for trading purposes.
​

​
So, just like Christopher Columbus who set off over the sea in search of the 'New World', those Silk roads and the opening up of the trading routes and posts, connecting the world, can be seen as the dawn of globalization. The same globalization that impacts on your life today. But, what does 'globalization' mean and how does it work?

i. Using the worksheet above, watch the video and complete the note taking task on globalization.

You will be coming back to study this work in more depth next year when you complete your G7 unit on 'The Geography of my Stuff'.
​
Trade (old and new) and Trade Wars! ​

During your work on the original Silk Roads in history, you will have discovered that trade has been going on for many thousands of years. You personally have taken part in thousands of trades already, even at your age. But what does trade mean and how can it happen?

Basically, this is the idea.

​Not every country on earth as every single material that it needs to make all its stuff and for its own people to use. Think about France! What plant-based hot drink do the French consume in great quantities .... that can't be grown in France?

Think about the clothes that you are wearing today. The cotton in your t-shirt or jeans were probably 'grown' in the United States of America. The rubber in on the sole of your trainer was probably tapped from a tree in the rainforest. The copper wiring in your laptop computer perhaps came from the biggest mine in the world in Chile, South America.

However, lots of countries around the world are dependent on France for products that they supply. Perhaps the expensive Michelin starred restaurant in New York that sells that expensive Bordeaux wine and Camembert cheese, or a customer in South Africa who buys a new Renault car.
The Belt Road Initiative (B.R.I)
​ 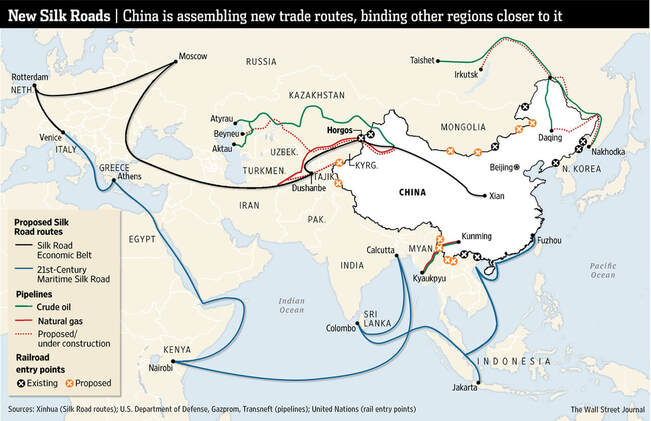 Belt and Road, or yi dai yi lu, is a “21st century silk road,” confusingly made up of a “belt” of overland corridors and a maritime “road” of shipping lanes.

​
From South-east Asia to Eastern Europe and Africa, Belt and Road includes 71 countries that account for half the world’s population and a quarter of global GDP.   (Guardian)


Put simply, the Belt and Road Initiative is an Asian-European-African continental trade agreement based upon interconnected transportation infrastructure, something very significant because

b) China is the chief architect; and

c) the USA is not a key player.


Task 2 - Why bring back the Silk Roads?

Complete the following activities on the worksheet in the space provided.

i. Try to think of as many reasons as possible why China would want to develop its global reach by strengthening and reopening some of these old trade routes.  Look at the places being connected. Record your thoughts on your worksheet.

ii. Now watch the first 'propaganda' video (Music video) and complete the appropriate section of the worksheet. Now do the same for second video (Vox), below.

Open Google Earth 'at night' by clicking on this link. Using this map (focusing on the belt i.e. overland routes) to complete the activities on the Task 3 worksheet.

i. What does the presence or absence of artificial light tells us about certain areas on Earth?

ii. What does that mean for the 'Belt' routes?

iii. Now, 'turn the lights on' and do some more research on some of the physical (natural) features and political issues that could prove to be difficult to negotiate.

The class is going to be split into half. Group 1 will be looking at the first half of the new Silk Routes and Group 2 will be studying the second half of the routes. Each route has a belt and road (ocean) section. Your instructions are below:

The 'First Half' team will be researching the land and ocean routes on this first half of the journey using the video below as the main resource. Your aim is to produce a 10 minute presentation to give to the 'Second Half' team about the routes, places and issues that you encounter from the video. This should be done as a PowerPoint presentation.

All members should watch the first 2.15 of the first video below.  Then, go to the relevant section of the video and start taking some notes. Each section can have either 1 or 2 people working on it. The teacher will sort it out.

The 'Second Half' team will be researching the land and ocean routes on this second half of the journey using the video below as the main resource. Your aim is to produce a 10 minute presentation to give to the 'First Half' team about the routes, places and issues that you encounter from the video. This should be done as a PowerPoint presentation.

All members should watch the first 2.15 of the first video below.  Then, go to the relevant section of the video and start taking some notes. Each section can have either 1 or 2 people working on it. The teacher will sort it out.

The 'Road' - Going Overseas!
​
Confusingly, the 'road' part of the BRI is actually the shipping routes that have been developed linking China to those countries who have become involved in the project. These are also known as the Maritime Silk Roads.

​The first map below reminds you of these modern day routes and the second map is Vasco del Gamma's first route in 1478 linking Europe with India and opening up the possibility of vast trade of goods, including spices.

i. Complete the compare and contrast activity on the worksheet using both maps below.

ii. Which engineering masterpiece has changed the route from having to sail around the southern Cape of Africa to sailing straight from the Indian Ocean into the Mediterranean sea?
Changing Boats

A lot has changed since those original journeys made between Asia and Europe. As you have seen, the route has been shortened and technology has also been used to increase the amount of trade possible between different parts of the world.

About 95% of manufactured goods are transported from where they are made where you buy them. There's a good chance most of what you are wearing today came on a ship! Flying is much quicker but costs a lot and nowadays, container ships are huge and can carry huge volumes leading to a decrease in overall cost of transport (economies of scale).
​
​
The Godfather of Containerization - Watch the video below and explain who invented  the container, and container ship and why (fact file task).
​
Threats to the Maritime 'Road'
​
Part 1 - When Ships Get Stuck!

The first threat we are going to look at is what happens when there is a problem with ships in the Suez Canal. Ships break down all the time but very few cause real problems. However, one incident in March 2021 caused a whole lot of problems and temporarily interrupted global trade along the Maritime Silk 'Road'. To see just how many ships there are journeying around the world, click this link. Have a good look at the Maritime Silk Road routes, especially though the Suez Canal.

Task 5 - When Containerization Goes Wrong - Watch the video below and create a fact sheet about the Ever Given container ship and what happened in the Suez Canal in March 2021.
​
Just How Big is the Ever Given? - Use this excellent tool to visualise its true size. Here it is against our school here in Toulouse.

​
Task 6  - Create a display (physical or electronic) that shows the size of the Ever Given container ship against a place that you know well (your school, your home,  a familiar sports stadium, city centre etc). You should use the key data and information from the previous research task and add it to the display in a creative way. 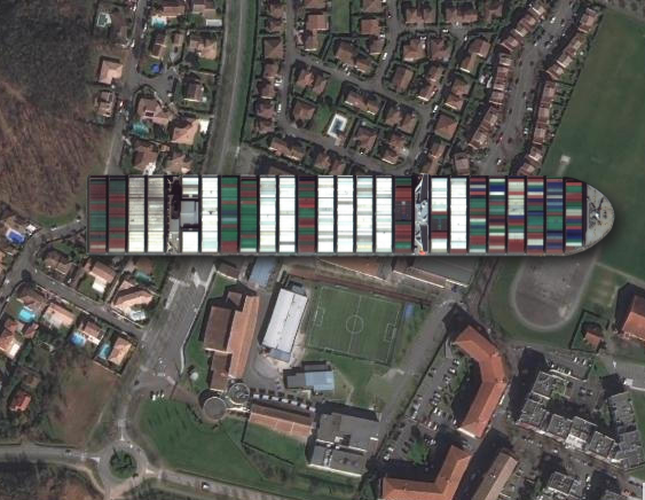 With many thousands of ships heading across the Maritime Silk Road every year, there are literally billions of dollars of goods passing over the oceans. This has come to the attention of modern day pirates and piracy has become a big deal. Watch the 9 minute mini documentary below to find out a little more about where these pirates come from and how hostage taking works.

​Always Two Sides to Every Story

​
Task 8 - Are the New Silk Roads going to bring more positives than negatives?

As we know, there are always two sides to every story and the New Silk Road is no exception. There are two videos for you to watch below.  The first is from the Chinese government and the second is from a Turkish television news channel.

Now, thinking back to all the work you have done, create a piece of extended writing that examines the good and bad points of the New Silk Roads (Belt & Road Initiative). Here is a potential structure for you:
​

1. What are some potential advantages, for China and other nations, of this project?


2. What are some potential disadvantages or concerns?


3. How would the New Silk Road be like the original Silk Road?


4. How would it be different to the original?


​5. Will China’s new project benefit or harm global trade? How?