In 2010, Qatar clinched the rights to the World Cup after winning a ballot of Fifa's 22 executive members. It defeated bids from USA, South Korea, Japan and Australia. It is the first Arab nation to host the tournament and the first World Cup to be held in November / December. You can keep up with all the fixtures using this interactive service from Marca.

​Task 1 - You will be completing a mapping from memory task to help you build up a picture of what Qatar looks like. To do this, you will be working in small groups. Each member of the group will come to the front and see a completed map of Qatar. Your job is to quietly stand there for one minute, remembering as much as you can about the map. Once your teacher tells you to, you should return to your group table and complete as much detail as possible on your blank map.
​
task 1 - qatar mind mapping task
Task 2 - Study the resource bank below. You will see some graphs and maps that show different features of Qatar.

​Complete the tasks on the worksheet below using the resources above. You can click on any image above to make it larger.
​
task 2 - worksheet - what is qatar like?

​How has Qatar Changed?
​

Qatar has changed almost beyone recognition in the last 50 years. Of course, all places change and your hometown perhaps looks somewhat different from how it looked in the 1970's. However, the transformation in Qatar has been vast and incredibly rapid.

Task 3 - Use the resources below as well as on the embedded worksheet to complete all the tasks.
Task 3 - how has qatar changed over the last 50 years?
So, what has been the driver for this enourmous change in the country?  Well, you probably have a really good idea of the answer to this question.  There is really only one thing that can lead a peasant pearl producing / fishing country to become one of the richest countries on earth in the space of 50 years!
Task 4 - Watch the video above and complete the quick fact finding mission and activities about modern-day Qatar using the worksheet below.

Your link to the Gapminder site is here.
task 4 - fact finding misson on modern-day qatar 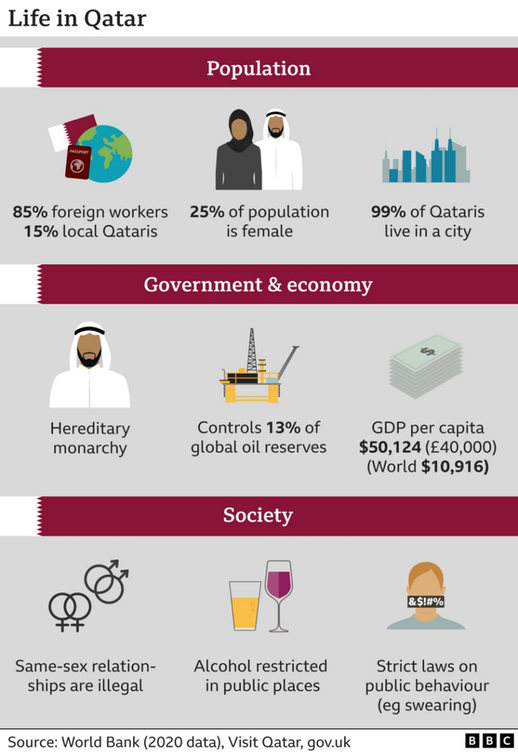 It should be noted from the diagram that it is not only "same-sex relationships" which are "not allowed" but any relationship other than marriage between a man and women is not allowed. And it should be noted that these laws refer to public behaviour;  people can behave how they like in private.  (Thanks to Hafsa Bobat).

Who are FIFA & how do they organise a World Cup?
​

Person 1 - The History of FIFA?

The FIFA World Cup in Qatar has generated huge amounts of interest and controversy.
​Check out their most recent video about Qatar 2022 by clicking here!

Task 5a - Fifa stands for (in French) Fédération Internationale de Football Association - or the International Federation of Association Football.  It runs world football and is in charge of organising and promoting big football tournaments around the globe - the biggest and most famous being the World Cup.   (source: BBC Newsround).


Using the information in the video, Create your own 30-minute 3 side PowerPoint slide show all about FIFA. Don't forget the other stuff that they do. Clue?


​
Person 2 - The History of the FIFA Football World Cup & how teams qualify.

​Qatar was chosen to host the 2022 World Cup by FIFA all the way back in 2010. Since then, FIFA and Qatar have been criticised by the media and supporters groups for the decision. Watch the first 2:03 of the video above all together as a class.

​Task 6 - You will be completing research and producing a short PowerPoint presentation focusing on each of the controversies listed below.  You should use the video above up to 8:30, this link to BBC Newsround and the blue tabs below, to create your presentation.

Please use the PowerPoint template by clicking the tab below.
​
Task 6 - qatar controversies - powerpoint template
Task 7 - If you were able to make a peaceful protest to FIFA & the governement of Qatar about any of the four issues above, which one would you choose and why?  The Danish (Denmark) team have already done this, check out the video above.

You are going to design a t-shirt that aims to highlight one of the controversies behind the Qatar 2022 World Cup. Use the template below to design your protest t-shirt and write a supporting statement explaining what you did and why.
​
Task 7 - qatar world cup - protest t-shirt design .PDF
Task 7 - Word version of the task sheet above
There are only eight stadiums being utilized for the FIFA World Cup 2022 in Qatar. This is the lowest number of stadiums for the World Cup since the 1978 edition in the host country of Argentina. They only used six stadiums.
Above, you will see a selection of headlines from well-known British newspapers from the same week in November 2022. The first two are headline news linking to things we have previously found out about Qatar. However, is it fair to say that 'Qatar Bans Love'? Is that accurate?

The third was from the global COP27 Conference in Egypt, but has a picture and short story on Qatar's first game in the tournament. Click on the image to enlarge and study it carefully, as well as the language used in the headline (in yellow).  Is this fair?  Qatar are currently ranked 50th in the world by FIFA, whereas as Ecuador are ranked 44th.  Should they use the word 'humbling' to describe a game that they lost 2-0?

You will remember from your work on Factfullness that 'BAD NEWS SELLS' and so we should always expect this. A side-effect of this is that the world can seem a worse place than it actually is as the good news sometimes doesn't get through.

As we can probably agree, the fact that this World Cup was planned to be a June / July event clearly demonstrated that FIFA had little knowledge of climate, or perhaps didn't know how to read a climate graph!  However, is all the rest of the controversy justified?

​
Time of year - This is only disruptive because European clubs shout the loudest. In the southern hemisphere, a June / July 'summer' world cup disrupts their season.  The Brazilian football season runs from April to November!  The Brazilians have a 4-week break every time there is a World Cup held.  Should we be outraged by that?


The €200 billion cost - This is a huge amount of money and dwarves previous World Cups. However, other countries spend heavily on the military, on the production of nuclear weapons and sending people to the moon? France has 290 nuclear weapons and in 2021 spent $6 billion to maintain these weapons!  In 2019 alone, the world spent THIS MUCH on nuclear weapons. Should we be outraged by that?


Migrant Workers - Qatar is one of the gulf countries to have encouraged migrants to fill the labour gaps in their construction industry. Dubai and Abu Dhabi have also done the same. These migrant workers are visible, but what about elsewhere when poor labour conditions are not so visible. Take the clothes and shoes you are wearing today. They may well have been made in a sweatshop in Bangladesh, potentially by a child.  Should we be outraged by that?

​
LGBTQ+ Rights - Many of the laws around the World criminalising homosexual relations originate from colonial times. And in many places, breaking these laws could be punishable by long prison sentences. Out of the 53 countries in the Commonwealth - a loose association of countries most of them former British colonies - 36 have laws that criminalise homosexuality. (source).  Should we be outraged by that?
Despite these criticisms, Qatar has tried hard to prublicise some of the more positive things that they will be doing as part of this World Cup.

​
Task 8 - You can spend up to 10 minutes watching the videos below about the stadia that will host the tournament, as well as learning about the air-conditioning systems that will help to cool the players and supporters during the matches. Then, using all the information in this section, complete the worksheet below.
​
task 8 - outrage & perspective

​During the Qatar World Cup, you will see regular advertisments by the seven FIFA partners. These commercial partners have paid FIFA huge sums of money to advertise at the event and to use the World Cup logo and brand in their own publicity.  It has been projected that up to 5 billion people will watch the World Cup around the world during the competition. That is 5 in every 8 human beings on planet earth!!

You can imagine why the companies below have paid so much money to FIFA for the right to advertise their products. Click here to read more about those companies.

Task 9 - Read about each of the companies using the hyperlink above. Then, one by one, watch each of their videos and complete the tasks set out on the worksheet below.
​
task 9 - fifa partners worksheet
Task 10 - Virtual World Cup Fieldwork

If you happen to be in your Geography class when a match it one, perhaps your teacher will allow a game to be played for several minutes on the big screen. During this time, try to look past the football and study the stadium carefully. Consider:

2. Do you see regular images of the fans in the stadium? If so, who they focus on and what are they doing?

3. Are the players taking regular water breaks or is the air-conditioning system doing its job.

4. Can you see evidence of the FIFA Partners in the stadium? If so, where and how often do their adverts appear?
​
5. Is there any sign of protest from the players / fans during the match?